RSS
← Moving up from the Hello World!! Immediately!

Starting from a Garage, a big dream come true

When you hear the garage, what’s on your mind? 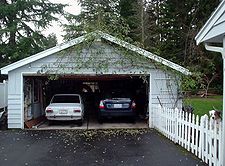 Most people know that the garage is a place in the house that   was designed to put the vehicles such as cars, motorcycles bicycles, or perhaps a plane :p

But who would have thought of the founders of  Apple.Inc., Steve Jobs and Amazon.com.Inc. founder, Jeff Bezos, where the garage of their home is their first stepin achieving their success to date.

I will tell of what I know 🙂

Amazon.com is an online sales company founded in 1994 by Jeff Bezos. Jeff Bezos create his business plan for his dream company’s. In the early days of amazon.com, the company is using Jeff Bezos’s garage in Seattle with a table made from old doors. Amazon.com product when it is just a book. With a makeshift facility, led by Jeff Bezoz, amazon.com able to create trust for their customers. So that amazon.com keeps growing and growing until now. The products sold were not just books, but also clothes, DVDs, etc. until now, Amazon.com is the largest online trading site in the world.

One more big companies that we definitely know now that their first office was in a home garage, Namely Apple, Inc. In 1976 Steve Jobs and Stephen Wozniak successfully completed the initial prototype first generation of apple, and who thinks that Apple’s first generation, assembled at the Steve Jobs family’s garage. Although Apple had experienced a bankruptcy, but the success achieved by Steve Jobs back and until now Apple, Inc. is growing rapidly with its products such as iPod, iPhone and the iPad, which certainly is to make consumers want to buy it.

The story of how steve jobs apple founded in his garage, bankruptcy steve, keep up with bill gates, can you see in the movie Pirates of Silicon Valley.

ok after the story know,, how do you respond??
start using your garage as your personal office? or elsewhere Your home is not enabled? haha

Essentially a success can be achieved because of the willingness and ability, not because of the facility, so use what you’ve got to start reaching for a dream, not have to jealous with other colleagues, friends or relatives you’ve got because you never know little things that you have that can take you on a success.

Posted by drionadyatama on April 9, 2012 in Uncategorized

← Moving up from the Hello World!! Immediately!

One response to “Starting from a Garage, a big dream come true”